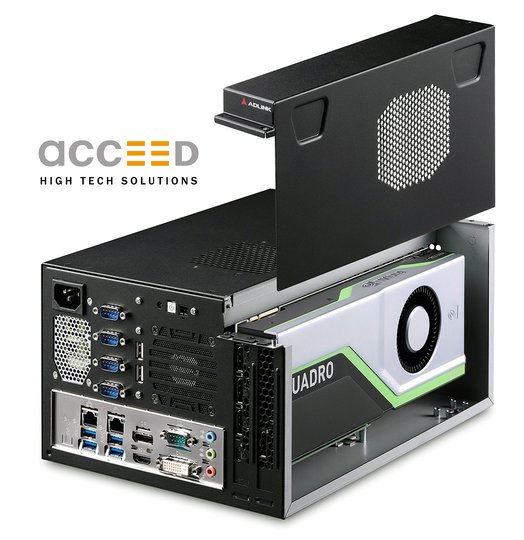 The new DLAP-4000 series industrial embedded computers are characterised by their PEG slot (PCI Express for Graphics). The PEG incorporates a PCIe-x16 slot which directly offers a higher power supply. PCIe cards in standard slots may only use a maximum of 25 watts, low-profile cards even only 10 watts. A PEG slot provides up to 75 watts, additional output can be accessed via the power supply. For edge computing tasks such as the intelligent control and monitoring of processes, machines and systems with large data quantities and complex algorithms, high-performance graphics processors such as the Nvidia Quadro models are essential. With its models, the DLAP-4000 series offers a variety of combinations with the Nvidia high-performance cards up to the RTX 8000.

The DLAP-4000 series models are extendable Box computers which are equipped by the German distributor Acceed with high-performance Quadro graphics cards from Nvidia and tailored to the customer’s specific needs. The AI platforms thus configured are primarily targeted for demanding edge computing applications such as Artificial Intelligence, Machine Learning, Machine Vision and basically all solutions based on the GPU’s high computing performance. In addition to the P2200 from Nvidia, the RTX 4000, RTX 5000, RTX 6000 and RTX 8000 models, also from Nvidia, are recommended.

These and further AI platforms and industrial Box PCs are available from the Official Sales Partner Acceed (www.acceed.com) in Germany. The company focuses on the edge computing, industrial Ethernet, Industry 4.0, customised IPCs for the fields of Automation, Facility Management, Logistics, Machine Vision as well as Research and Development.