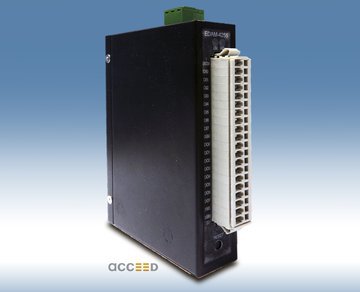 The I/O modules of the EDAM-4200 series offer a cost-effective solution for communication with local terminals in automation and building control networks.

The Acceed EDAM-4200 series of I/O modules offers a cost-effective solution for data communication with local terminals in automation and building control networks, e.g. for production control or remote maintenance. The concept is based on combining the most frequently used I/O types in a single module. In this way, costs are reduced not only during setup, but also during maintenance and expansion in the network. Small DA&C systems or stand-alone controllers can be quickly created with one or two EDAM-4200s. Thanks to two Ethernet interfaces, further modules can be easily connected to a distributed I/O architecture according to the daisy-chain principle.

The core functions in smart networks include the feeding of data, signals and locally acquired measured values. This applies in particular to the industrial environment of machine and plant control, but also to building automation and, in the meantime, also to automation applications (Smart Home) that are possible in the private sector. In addition, there are requirements for remote maintenance and remote control. The possibility of network connection is usually available. The interface for local data acquisition or device switching is provided by I/O modules such as the EDAM-4200 series. The individual models differ, among other things, in the number of input and output channels. A good overview of the different specifications can be found on the website Acceed.com under the search word EDAM.

The EDAM-4200 series modules support the industry standard Modbus/TCP protocol for use with Ethernet controllers or HMI/SCADA software with Modbus/TCP drivers. TCP/IP, UDP, ICMP and ARP are also supported.

The function of automatic DIO synchronization is interesting. In peer-to-peer networks, the pairwise assignment of modules of the EDAM-4200 series can be defined. In this way, input values are transmitted directly to the assigned output channels and an output can be activated depending on the state of the input. With the auto-off function, an output is set to monostable operation. After a defined period of time, the output automatically returns to the stable state until another trigger is executed. Power-On value and Safe value are further functions for automatically setting outputs to a defined state, for example in connection with switch-on processes or watchdog actions. With the integrated features, important basic functions can be quickly set without much programming effort.

The daisy-chain connection of several modules, made possible by two RJ45 interfaces, effectively simplifies provisioning and scalability in Ethernet networks. The risk of data communication interruptions in the event of a power failure at one point associated with the daisy chain topology is absorbed by the integrated auto-bypass protection. According to the manufacturer, this feature guarantees the automatic re-establishment of the network connection within 2 seconds after a power failure at a module.

The housings of the very compact modules are suitable for DIN rail mounting in control cabinets as well as for wall mounting. Status LEDs show the most important information at a glance. Screw terminals are available for the signal connection, the power supply (10 to 30 V DC) is via an external power supply unit. An ambient temperature of -10 to +70 °C is permissible for operation. The optical insulation is specified at 3750 Vrms.