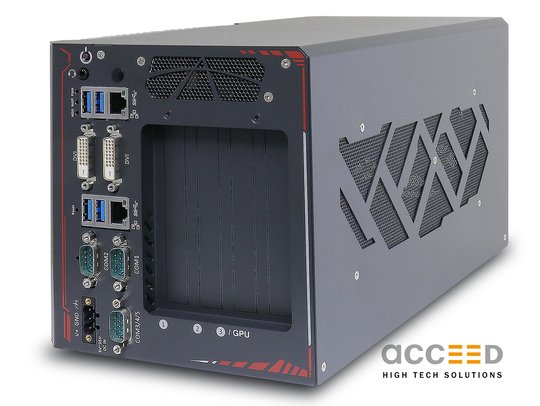 The Nuvo-8111 is a newly developed series of cost-efficient computer platforms which are geared to the use of AI without compromise. The industry box computer, which is now available from the distributor Acceed with several design combinations, convinces with its three extension slots and support by a high-end graphics card from Nvidia, for example the RTX 3060/3060 Ti. With a GPU performance of up to 20 TFLOPS (benchmarking with FP32), performance and efficiency in factory automation, image recognition and optical in-line manufacturing tests when controlling pick-and-place robots and generally in new GPU-accelerated applications can be significantly improved.

As opposed to the commonplace CPU (Central Processing Unit), the GPU (Graphics Processing Unit) is a specialised and optimised processor for calculating graphics. The many smaller processor cores designed for more specific tasks show their strength in the interplay if the data processing processes can be split to several cores. With the programming interface CUDA for highly parallelisable program sequences developed by Nvidia, significantly increased performance can be achieved via the GPU. At the same time, the CPU is relieved and is available for other tasks. Industrial applications profit in the area of intelligent image evaluation, for example for robot controls, vehicle and transport system coordination, but also for process analysis and complex simulation.

Depending on the equipment variant, the new AI computer platform Nuvo-8111 works with the 9th or 8th generation Intel processor and an H310 chipset. It has an x16 Gen3 PCIe slot which holds a GPU card as well as an additional x4 PCIe and a PCI slot for industrial I/O cards such as DIO, AIO, communication or motion control cards. The inputs and outputs are installed directly at the front, including two GbE interfaces, four USB 3.1 Gen1 connections and five COM connections. Therefore, access for installation and flexible adaptation remains comfortable during operation, also if they are installed in a switch cabinet or a rack. Two locations for 2.5-inch SATA hard disks (SSD or HDD) are available as storage options as well as a mSATA socket for holding a mSATA-SSD.

The Nuvo-8111 is the good value response to the increasing demand for the modernisation of traditional production and factory automation using edge AI. With its support of the high-end and mid-range class and its compact design in accordance with industrial requirements, the Nuvo-8111 is a good choice for bringing artificial intelligence to factory floors and logistics locations. Customer-specific components such as the CPU, RAM, SSD, HDD or PCIe cards for individual tasks can be procured, installed and tested by Acceed if desired in order to support immediate readiness for use.