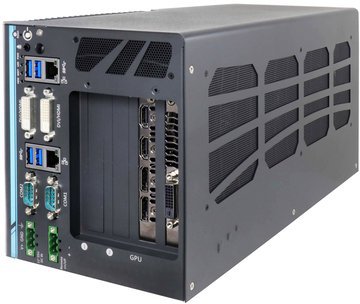 GPU acceleration in parallel computations use with the high-performance embedded computer Nuvo-6108GC from Neousys.

The technology of complex computations is currently undergoing a development away from pure CPU systems and towards division of labour operations on the CPU and the graphics processor. In contrast to the CPU (Central Processing Unit), the GPU (Graphics Processing Unit) is a processor core specialized and optimized for the calculation of graphics. The programming technique CUDA (Compute Unified Device Architecture) developed by Nvidia, with which program parts can be processed by the graphics processor (GPU), leads to significant performance increases in highly parallelizable program sequences. The industrial graphics computer Nuvo-6108GC, now available from the German distributor Acceed, is the ideal platform for GPU-accelerated applications of simulation, virtual reality, machine vision and many other CUDA-based computations.

CUDA is a parallel computing architecture developed by Nvidia that can significantly increase the computing power of the system by leveraging the power of the GPU. The tasks that can be parallelized include not only graphics but also weather calculations, finite elements or matrix operations. At the same time, the CPU is relieved and is available for other tasks. Industrial applications benefit from machine vision, intelligent video surveillance, process analysis, data visualization and simulation.

The Nuvo-6108GC is the ideal platform for the growing market of GPU-based industrial applications with its GPU-supported performance optimization and industry-standard ruggedness at high ambient temperatures. Acceed informs on www.acceed.com about configuration variants of the new industrial PC as well as about further industrial box PCs and components for professional signal processing and communication technology.