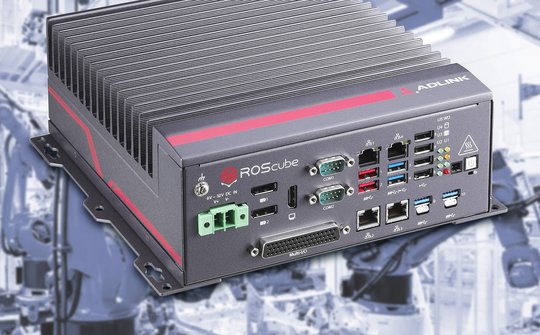 Artificial intelligence, specifically machine learning, finally also arouses increasing interest in the more classical industrial applications, whether for servicing and error prognosis or the optimisation of operating and manufacturing parameters: the use of specialised and high-performance hardware supports the rapid development of software and algorithms effectively. Acceed has now added several robotics controllers from the ROScube series to its programme in order to support these development steps by its customers optimally. The ROScube-X has an integrated Jetson module, whilst the ROScube-I was developed specifically for the extension with Intel VPU or Nvidia GPU.

Jetson is the manufacturer Nvidia’s brand name for a series of integrated computer chips with a Tegra processor. Jetson was specifically developed as a low power system in order to accelerate applications in the machine learning (ML) area. Machine learning, as it is also named in German, can be viewed as an area belonging to artificial intelligence (AI). Here, algorithms establish a mathematical model based on so-called training data in order to make predictions or decisions without being explicitly programmed to do so. Machine learning algorithms are used increasingly in industrial applications, for example for machine and system diagnosis, for optimising settings during the commissioning phase or for autonomous process adaptation during operation. Even the development of new products can be sped up considerably by using machine learning. When it boils down to it, this concerns increasing efficiency, productivity and availability which cannot be achieved using conventional programming and simple controlling.

Nvidia introduced the Jetson Xavier NX as a new developer board for the machine learning sector last year. The board was also developed for use in robots and for edge computing and is used in the robotics controllers ROScube-I and ROScube-X, which the distributor Acceed has now included in its programme.

The ROS2-capable ROScube-I is optionally equipped with various 9th generation i7, i3 or i5 BGA Intel processors. The interfaces which are particularly designed for robotics use serve the connection of a large number of sensors and actors, thus providing the best possible versatility when implementing high-performance robotics applications. An optional extension box (PCIe Gen 3) additionally allows the installation of application-specific hardware extensions. The ROScube-I is optimised for use with Intel VPU or Nvidia GPU cards for the calculation of AI algorithms and inferences.. The robotics controller supports all developments with the Adlink Neuron-SDK for industrial use, for example for autonomous mobile robots (AMR) and autonomous mobile industrial robots (AMIR).

The ROScube-X incorporates the Jetson Xavier module and moreover an integrated Volta-GPU, both from Nvidia, as well as two deep learning acceleration units. The full functional scope of the JetPack SDK and the Neuron SDK is supported for development. This makes the controller an excellent platform, especially for robotics applications with high AI computing performance demands with simultaneous low electricity consumption.

The further features include robust, lockable USB ports, the large number of I/O interfaces, time synchronisation with GMSL2 cameras and IMU, remote power-on for robots and real time access for CAN bus, GPIO and serial interface. The admissible ambient temperature for operation is defined with a maximum of -20 to +70 °C, depending on the configuration. Further technical details and information regarding application options are available directly from the German distributor Acceed.