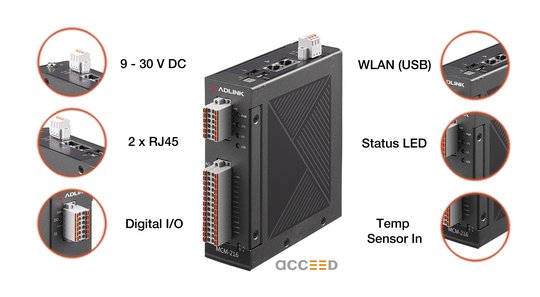 The recording of conditions measured by sensors in all important positions of a system forms an essential prerequisite for intelligent processes in Smart factory scenarios and efficient automation. Data recording, abbreviated as DAQ, incorporates the recording of analogue signals from sensors and their conversion to digital values for further processing with software. The new ultra-compact MCM-216 is a DAQ computer which functions autonomously and has 16 channels for feeding voltage values. Its sister model MCM-218 works with 8 inputs for recording analogue current values from 0 to 20 mA. Both models support a maximum sampling rate of 250 kS/s.

Data recording in Industry 4.0 manufacturing environments is used for identifying and collecting important information, which is also necessary as a basis for management and controlling, energy-efficient use and the anticipatory servicing of automated systems. For this purpose, sensors record the desired condition and performance data for individual components and pass on corresponding signals, voltage or current to the DAQ module. Converted to digital values there, they either trigger programmed actions directly on-site, the MCM-216 both via digital and analogue outputs, or they are communicated digitally to the control system or to further autonomous devices. The direct recording of vibrations is a typical application here in order to identify the formation of bearing defects in good time and therefore warn against possible subsequent damages, known as condition monitoring.

In larger, centrally managed computer architectures, the recording and digitalisation can, for example, take place via several DAQ plug-in cards (PXIe systems), or processing takes place decentralised as so-called edge computing with autonomous DAQ computers directly in the field in the vicinity of the signal transmitters.

The hardly hand-sized MCM-216 and equally the MCM-218 enable 24/7 data recording of sensor current with a high degree of precision and a fast scanning rate. Both devices in the industrial full aluminium casing can be used immediately without an additional host computer and be integrated in existing networks via the two gigabit Ethernet interfaces. Thanks to the two LAN sockets, several devices can be easily linked on-site without much wiring work if required (LAN daisy chain). The raw signals recorded by the sensors can be directly filtered locally and compiled in higher-value data such as FFT, voltage, arrays or OA values. With this, one or several devices can be ideally applied as an independent measurement system at remote field locations. In case of transfers of the converted and filtered sized-down data to a central location, the processing requirements of the backend server are reduced drastically.

The integrated Web console makes configuration without additional software possible. A standard Web browser suffices for remote data recording setup. The settings for relevant parameters and data types are depicted in an intuitive dashboard format. Application-specific filter algorithms can also be imported via the Web console, are written in C/C++ and compiled under Linux.

Both the MCM-216 and MCM-218 are driven by the ARM Cortex-A9 with 1.0 GHz. Model-dependent, 8 or 16 channels, each with 250 kS/s sampling rate, are available for simultaneous sensor signal recording. The range of recorded input voltage can be selected for the MCM-216. In addition to network connection via two GbE interfaces, optional WLAN modules in the USB sockets are also possible.

With its very compact dimensions of 127 x 111 x 40 mm, the aluminium casing is also suitable for top-hat rail assembly. The admissible ambient temperature for operation is defined with 0 to 50 °C.